There are three principal types of natural graphite, each occurring in different types of ore deposit

The mineral graphite is an allotrope of carbon. It was named by Abraham Gottlob Werner in 1789 from the Ancient Greek (graphō), "to draw/write". . Unlike diamond (another carbon allotrope), graphite is an electrical conductor, making it a semimetal. Graphite is the most stable form of carbon under standard conditions. As a result it is used in thermochemistry as the standard state for defining the heat of formation of carbon compounds. Graphite may be considered the highest grade of coal, just above anthracite and alternatively called meta-anthracite, although it is not normally used as fuel because it is difficult to ignite.   (Wikipedia) 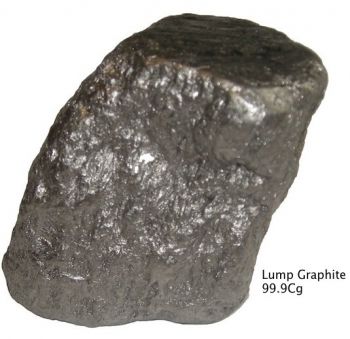 Vein or Lump graphite is considered the rarest, most valuable, and highest quality form of natural graphite. It is formed from the direct deposition of solid, graphitic carbon from subterranean, high temperature fluids.

The grade of vein graphite is typically above 90% Cg, with a purity of 95-99% carbon without refining.

Vein graphite has higher thermal and electrical conductivity, and it also has the highest degree of cohesive integrity of all natural graphite. Vein graphite is easy to mold and can be formed into solid shapes without the aid of a binder addition, which leads to considerable cost savings over lower grade feedstock. Sri Lanka is the only jurisdiction that currently produces vein graphite. Given the carbon content typically found with lump/vein graphite, recovery operations and costs will normally be lower than flake or amorphous graphite recovery. Lump graphite processing techniques can include everything from hand sorting of large concentrated samples to standard crushing, grinding, froth flotation and milling. Lump/vein graphite is suitable for many of the same applications as flake graphite giving it a distinct competitive edge in terms market prices and product applications.

Although flake and lump share similar crystalline structures, there is distinct difference in their range of naturally occurring grades, or percent Carbon (%C) in the ore body.  Flake grades typically range from 2-10 %C, while lump such as that found in Sri Lanka can easily be in excess of 80%C. Amorphous grades are generally in between 15-30 %C.

This range of grades has numerous implications, but at the top of the list is the knowledge that the higher the grade the lower the mineral processing costs. Further differentiating occurs as a result of purity. With lump being roughly a solid mass, the level of impurities is very low. This is a key consideration for potential customers. The fewer the impurities the better. Low grades may have higher processing costs but if they have few impurities they can still be made into a good quality material. Each of these factors will also influence prices up or down depending on final mineral processing costs.

Occurs as isolated, flat, plate-like particles with hexagonal edges if unbroken and when broken the edges can be irregular or angular. Has a distinctive plate-like or ‘flake’ formation.  Flake graphite is subdivided into large, medium and fine sizes and is a less common form of natural graphite, and is of higher quality than amorphous graphite. It is formed in metamorphic rocks or calcareous sedimentary rocks. The grade of flake graphite ranges from 10-12% Cg, and the purity varies from 85-95% carbon after refining. Natural flake has the widest range of use and accounts for about 49% of natural graphite consumption. The primary uses includes brake linings, batteries, and fuel cells. Flake graphite can be sold for four times the price of amorphous graphite. China, Brazil, Canada are the largest producers of flake graphite.

Amorphous graphite is the most abundant form, but occurs at the lowest in grades than other natural graphite and is the most abundant. It is formed by the metamorphism of previously existing anthracite coal seams. The term “amorphous” refers to its very small crystal size of particles, which are not visible unless viewed under magnification. Amorphous sells at a significantly lower price than flake graphite and accounts for about 50% of global natural graphite market and is used for lower value graphite products, such as pencils, brake pads, and rubber additives, and is the lowest priced graphite. The grade of amorphous graphite ranges from 20-40% in Cg (graphite content), and the purity varies between 70-85% carbon after refining. Large amorphous graphite deposits are found in China, Mexico, and United States. 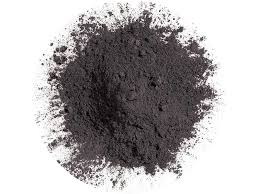 Highly ordered pyrolytic graphite or highly oriented pyrolytic graphite (HOPG) refers to graphite with an angular spread between the graphite sheets of less than 1°. This highest-quality synthetic form is used in scientific research, in particular, as a standard for scanner calibration of scanning probe microscopes. The name "graphite fiber" is also sometimes used to refer to carbon fiber or carbon fiber-reinforced polymer.

Invention of a process to produce synthetic graphite
A process to make synthetic graphite was invented by Edward Goodrich Acheson (1856–1931). In the mid-1890s, Acheson discovered that overheating carborundum, which he is also credited with discovering, produced almost pure graphite. While studying the effects of high temperature on carborundum, he had found that silicon vaporizes at about 4,150 °C (7,500 °F), leaving behind graphitic carbon. This graphite was another major discovery for him, and it became extremely valuable and helpful as a lubricant.  Source Wikipedia